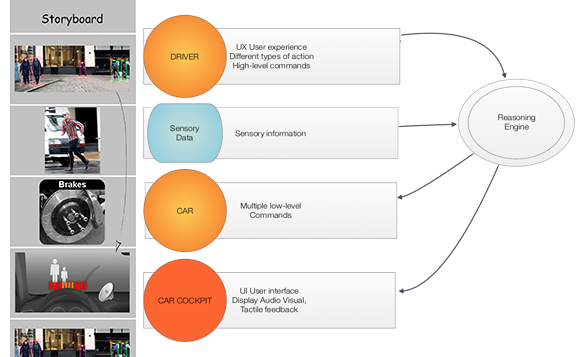 The growth of global cities puts more pressure on efficient transportation systems and on the regulation of car traffic. People are also more demanding about the cars that will enable them to travel through the increased density. As a result, the design of cars is becoming influenced by the demands and constraints of an increasingly urban population.

Cars need to be more environmentally friendly, smarter and be able to accomplish more complex tasks. Until recently, humans drove cars and made forecasts about their paths through the city. Some drivers are traffic experts from experience, others are listening to news about the traffic on the radio.

The new meshing of sensors around and inside the car creates a new driving experience. Sensing provides the driver with real-time information about the context and the spatial and social environment of the car. This can include local sensors (computer vision, stereo vision, infrared vision, radar, Lidar, and differential GPS) and participatory sensing which involves sharing data from several cars.

An important factor of the new driving experience is usability and visualization. Valuable information needs to be provided to the driver in real time.

Volvo's "Full Auto break" system is an example of collaboration between a driver and an automated driving system. In this case, the automated system takes over the control of the breaks before warning the driver of an imminent collision.

The above diagram illustrates Volvo's "Full Auto break" system, an example of collaboration between a driver and an automated driving system. On the right side, a storyboard of a sequence of actions happening in the physical world. On the left side, the corresponding actions and reactions of the driver and of the automated system. After the data is focused, filtered and processed, a low level command is directly sent to the breaks while visual and sound alarms are displayed in the car cockpit.

Since there is an abundance of data available from sensors how can we provide the data available to drivers so they can make educated decisions about their own traffic choices?

Answering this question requires a complete redesign of the traditional dashboard, a new kind of user interface using apps with the following functions: (1) to gather data, (2) to access data, to extract data, and to mesh data from sensors or to use "sensory-data" or “sensor-fusion” to provide a high volume of data that can be processed together, and (3) to focus and filter the type data needed by the driver and at the time that the driver needs it.

The above diagram illustrates the trajectory of data coming from the world to the inside of the car. The raw data from sensors may not be immediately used by the driver. Raw data requires additional processing in order to mesh with other data and to be compatible with 2D surfaces, 3D objects or time related dimensions. The data displayed in front of the driver of the car requires focusing (to dtermine which information is needed by the driver) and filtering (to determine at what time the information is needed by the driver) before being displayed inside the cockpit of the car.

A key element while designing for the future is to recognize the central place of the driver and his or her acceptance to collaborate with an automated driving system; starting with some level of automated assistance for the driver. There are some moments where an automated system could temporarily replace the driver; such as in a traffic jam. A self-driven car which is fully automated requires complete acceptance of the system by the driver. 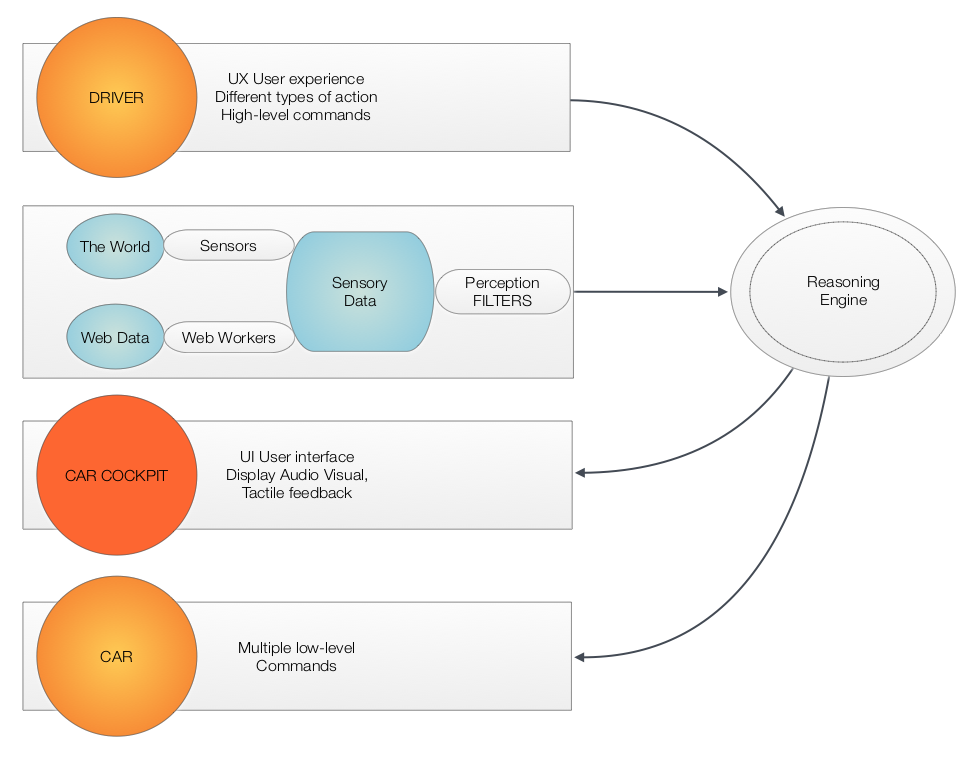 The above diagram illustrates possible collaborations between a driver and an automated driving system. The trajectories of data presented in the previous illustration are inserted inside a larger context The data is fed into "the "reasoning engine" of the car. As communities and governments start to raise concerns about sensing and self-driving cars, the success of this technological revolution and a drivers' willingness to buy into it will require breakthroughs in interaction design and collaboration between driver and automated systems.

Several prototypes of interactive designs using web components, overlays and templates -- that can display different kind of data according to the driving tasks -- will be presented my next post.