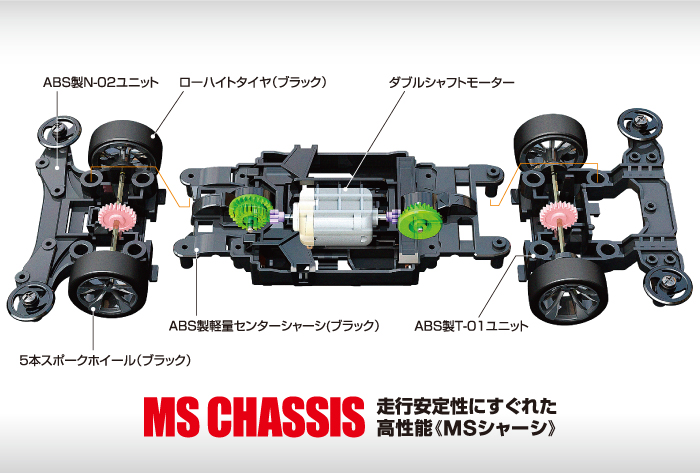 Blog
A car that is approachable and intuitive as a toy.
By Jean-Marc Gauthier

Things to keep in mind: Model cars are metaphors of real cars.

Toys can be utilized to improve natural communication between cars and humans. Great toys are approachable and intuitive. They use key components of the design of a car and a visual language that is immediately recognized and understood. Toys - for example Lego MIndstorms - have been used as the starting point for developing design concepts that are related to human-car interface, computer vision and robotics. This post shows some of the car designs of Kota Nezu that are often inspired by model cars. Kota Nezu, a former designer from Toyota i-unit, is now at  znug design. He worked with Takashi Shinohara from ZMPa>, an engineer who was with Honda R&D.

The above picture from the online catalogue of the toy manufacturer Tamiya.com shows the slick design of the chassis of an electric toy, the Astralster Mini 4WD. Toyota produced an electric car designed by Nezu which is based on this toy. 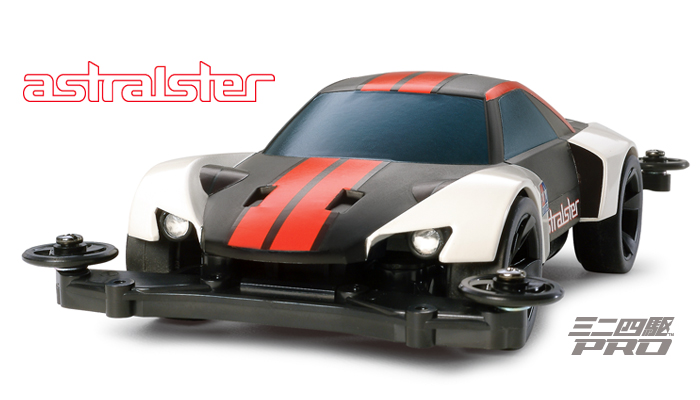 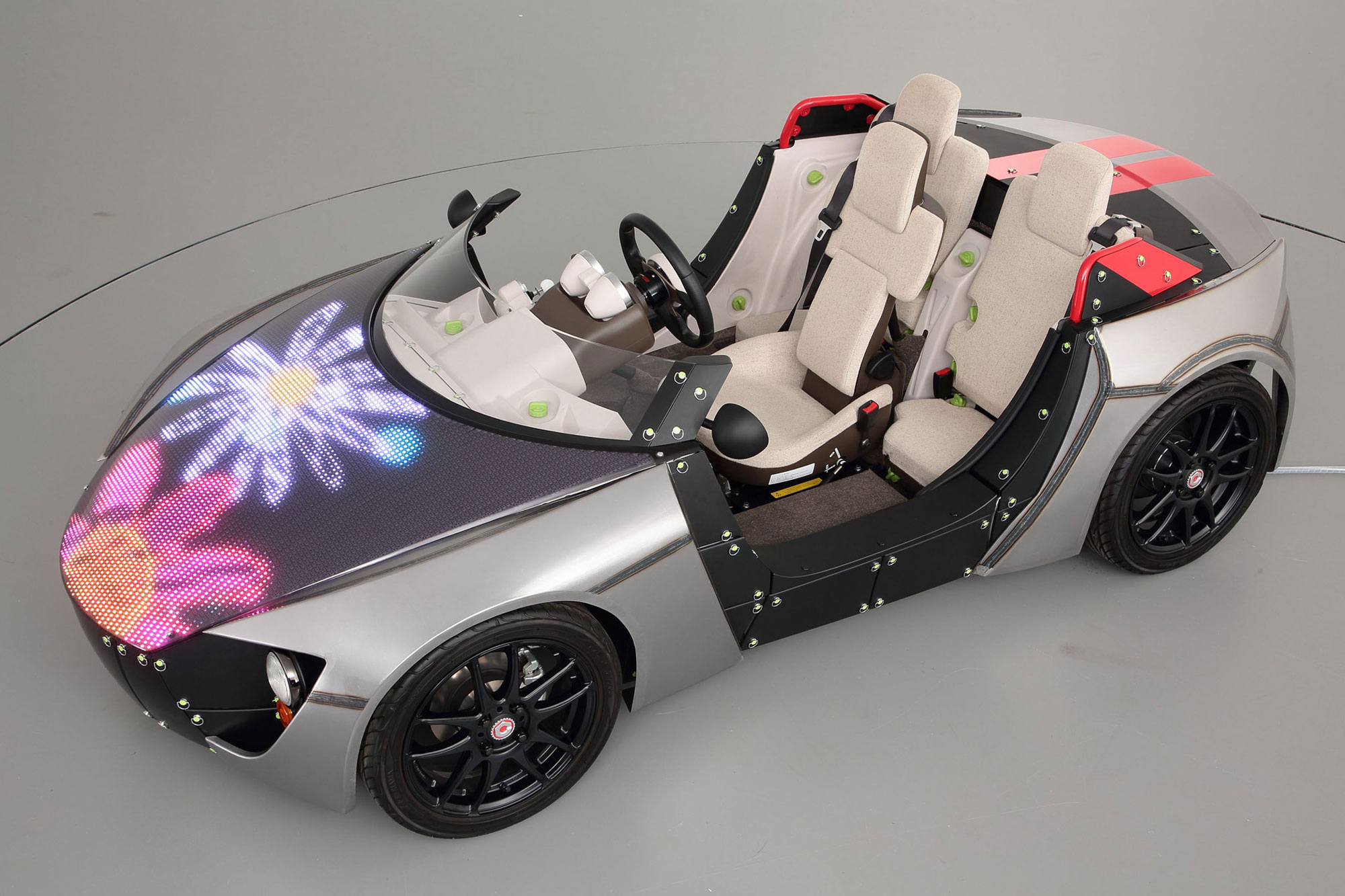 The same design components and visual language can be found in Toyoyta’s Camatte57s designed by Nezu. Photographic sources: "Toyota Camatte at the 2013 Tokyo Toy Show -10- Picture by Bertel Schmitt" by Bertel Schmitt (BsBsBs) - Own work. Licensed under CC BY-SA 3.0

The LED screen display on the hood reinforces playfulness and identity of the Camatte57s Sports. Similar LED screens mounted on flexible rubber can be found on the Mercedes "invisible car". 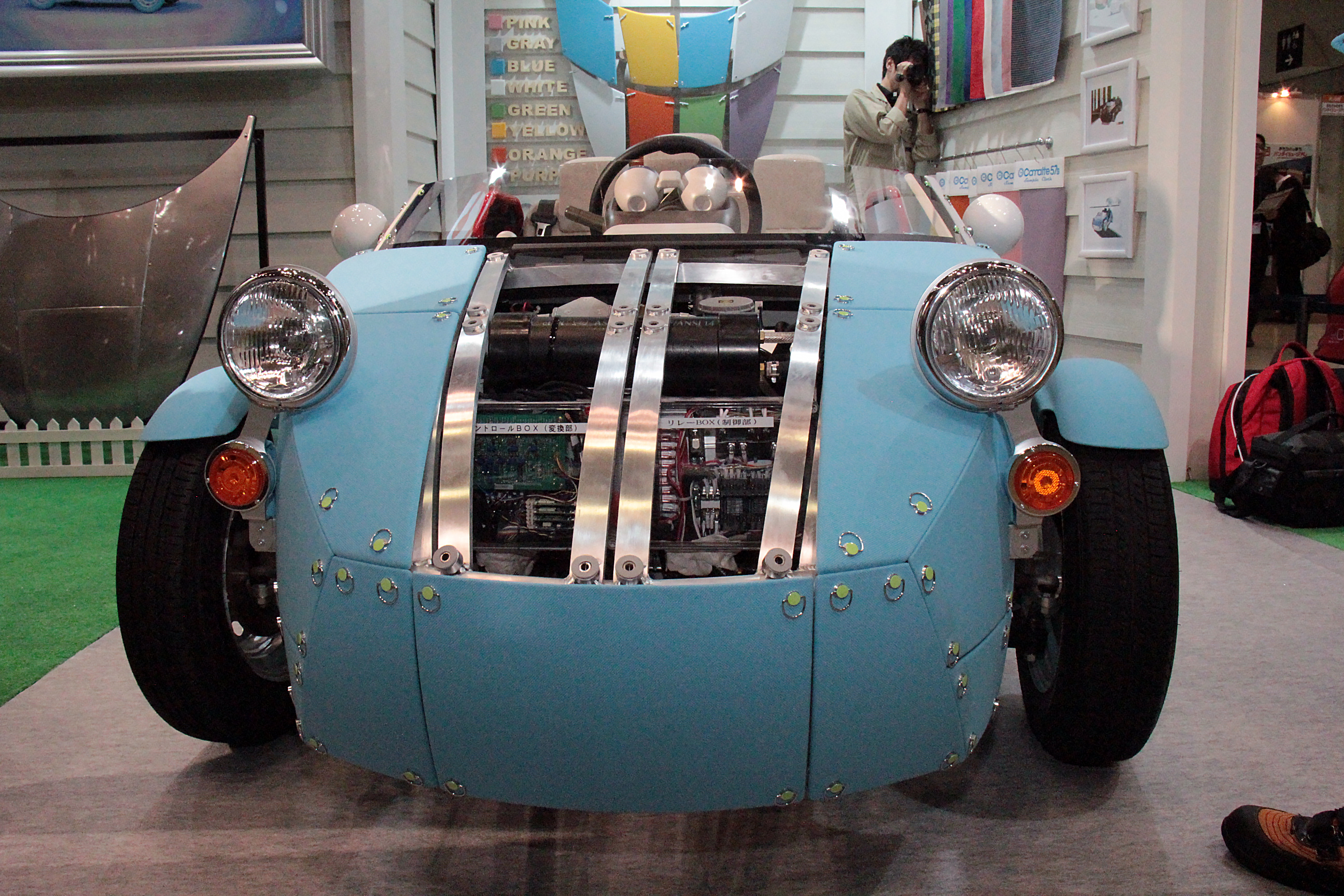 This 2013 version of the Toyota Camatte uses quick release fasteners that snap elements of the body on the frame. The Camatte cars designed by Nezu share the same underlying chassis and have different bodies mounted on the same frame. Photographic sources: "Toyota Camatte at the 2013 Tokyo Toy Show -10- Picture by Bertel Schmitt" by Bertel Schmitt (BsBsBs) - Own work. Licensed under CC BY-SA 3.0

The design of the cockpit of the car shows a playful interface similar to what can found in a Fisher Price toy. Note the design of the green clip plastic rivet. Source Toyota's Camatte Lab. 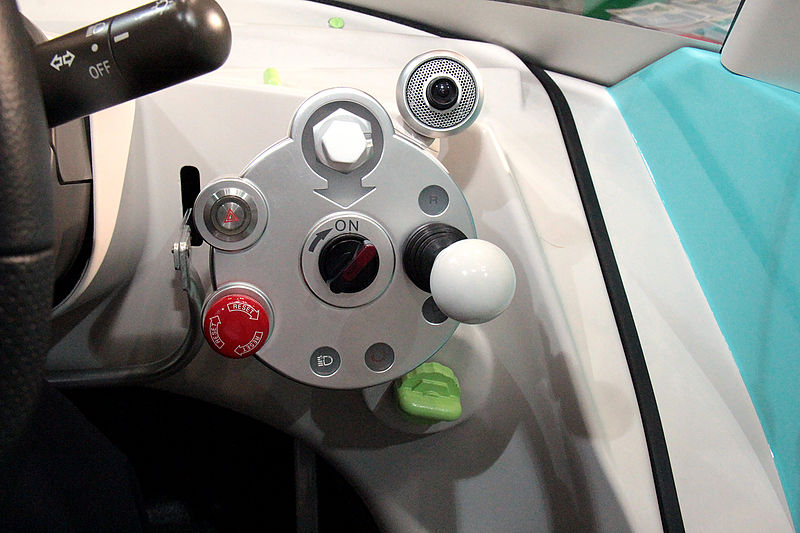 The body can be reconfigured with different versions based on layouts of three-dimensional tiles snapped on the frame of the car. This is a cross betwwen Ikea's furniture design, "do it yourself" and Tamaiya's toy design. 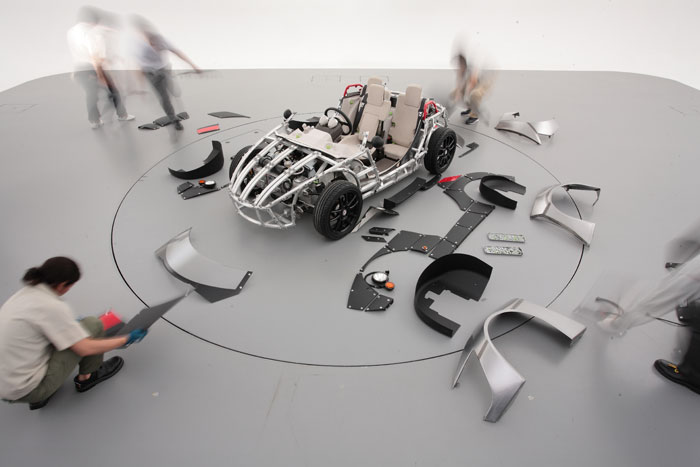 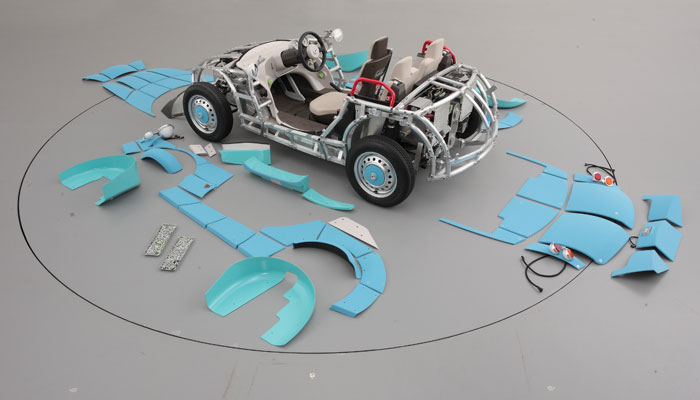 The Robo Car is an automated toy car developed several years before the Camatte by Kota Nezu,  znug design, and Takashi Shinohara, ZMPa>. 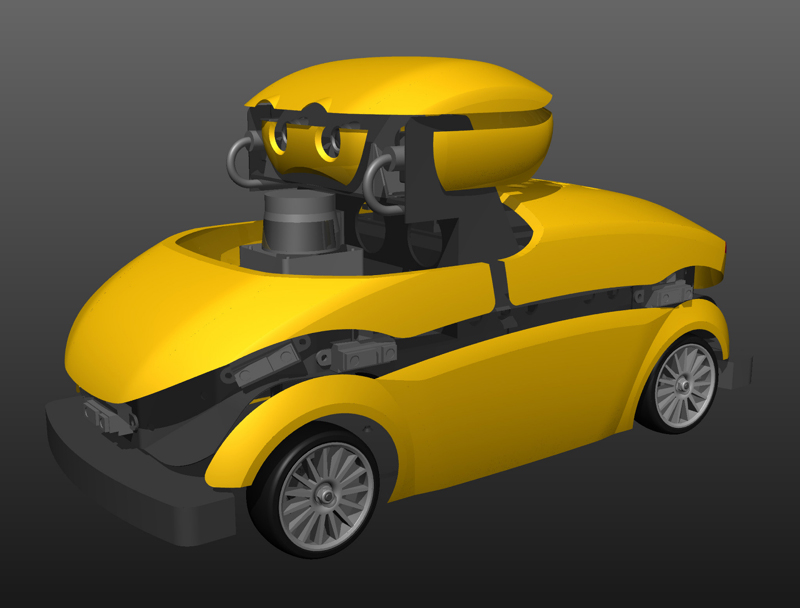 www.plasticpals.com The reference to the Tamyia chassis is clearly visible on the following picture dated 2008, five years before the Camatte. The design of the frame in the front of the car and the location of the key components is similar to the future design of the Camatte. Robo Car is a hybrid between a model car and a robot and may be a link in the evolution between a model car and a robot. 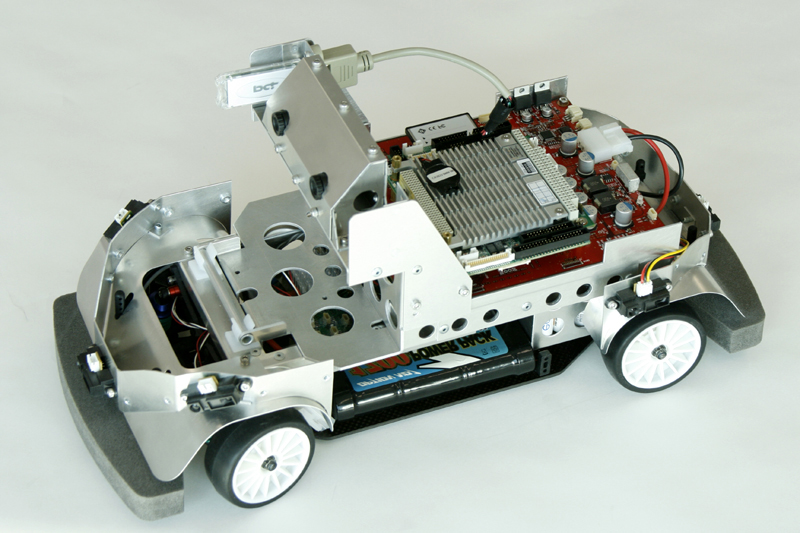 Sketches of the design of the Robo Car 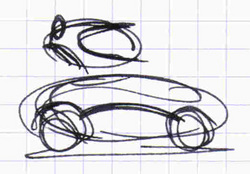 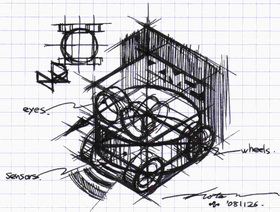 Details for the automated car's head 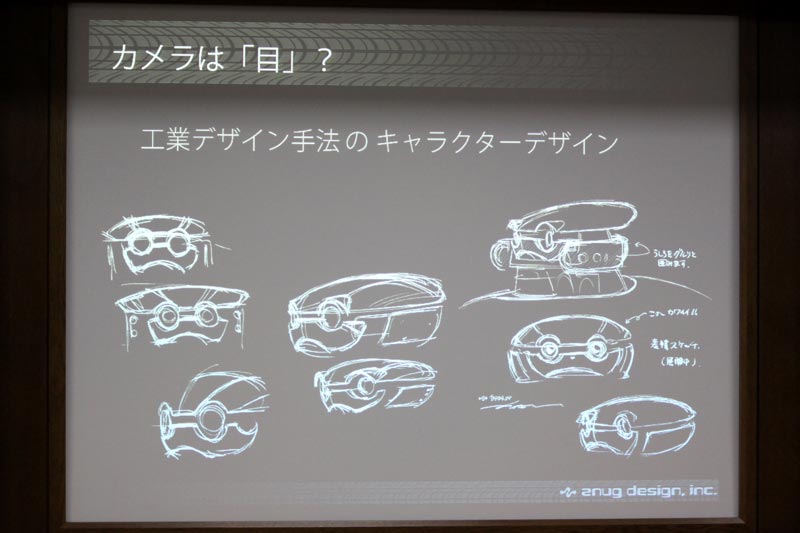 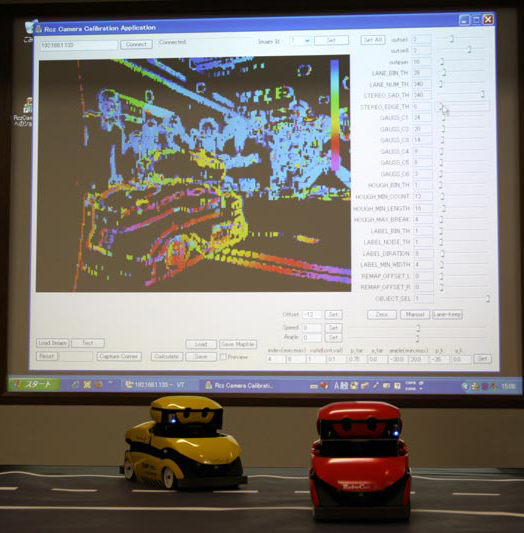 We can see that the lights of the video cameras from the yellow and red cars. The image projected behind the cars shows the computer vision system of the yellow car looking at the red car. People watching the demo are visible in blue in the background. The image of the red car rendered with dotted lines is visible on the screen. The system can also analyze the lines of the lanes painted on the floor. In this case, the design of the head on top of the body is obviously a key element of the processing of the image of the car by the computer vision system.

From car design to robot design.

The design of a human-like robot's body by Nezu shows a three dimensional layout of rigid shields covering different fonctions of the robot's body. In the final version, the exoskeleton is made of segments connected by large black gaps showing the red joints for the motions (red circles). The following pictures present the evolution of a Toyota robot by Kota Nezu of Znug design. 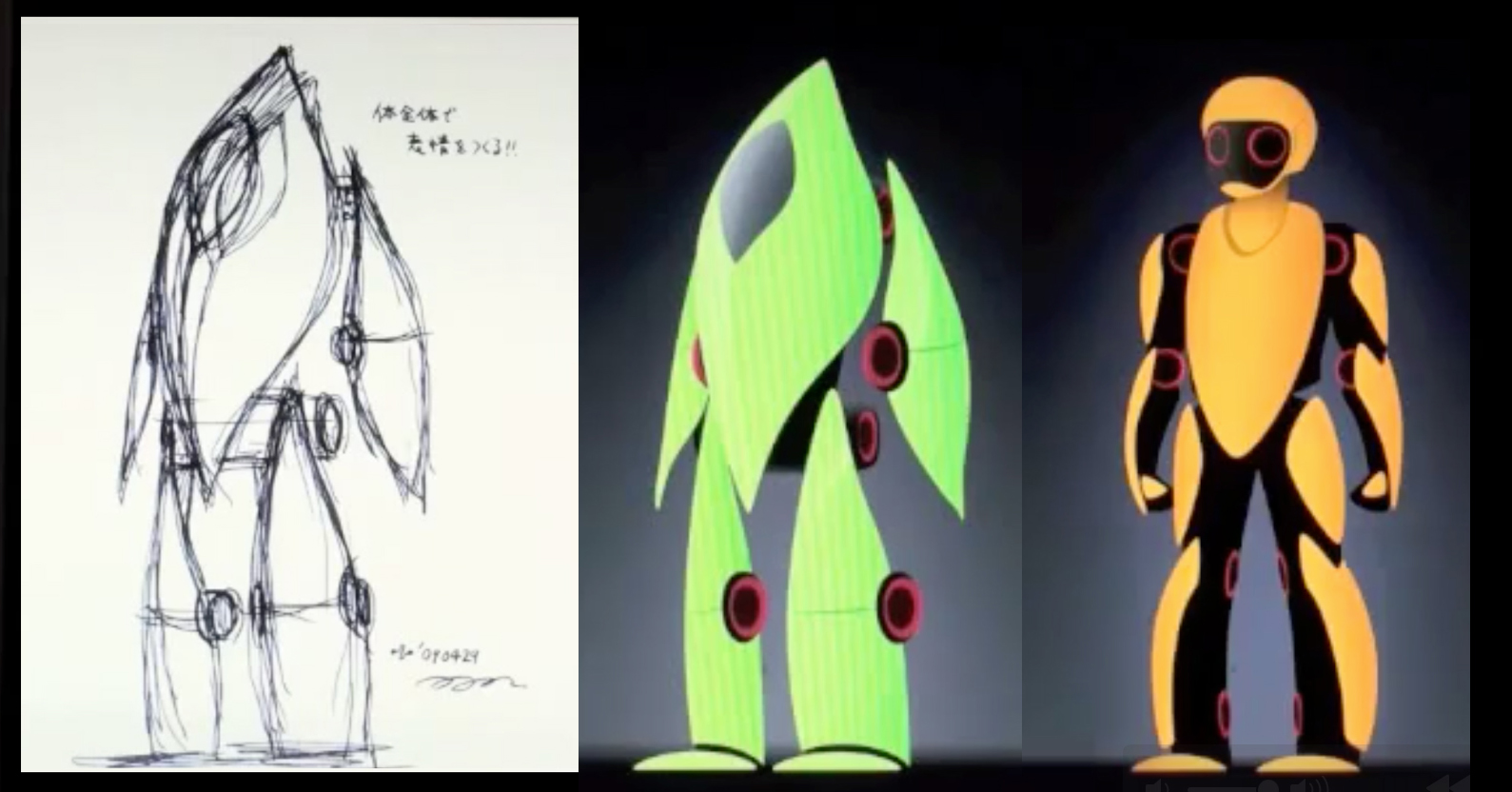 Illustrations from the Znud design website and screen captures from a You Tube video.

From the early sketches to the prototype, we can follow the evolution of the plates that become more three dimensional and visually connected. The red lines visible on the following sketch show how the designer anticipates visual connections between the shapes of the robots. These composition lines or "lignes de force" wre for both the human eye and a fine grain computer vision system. 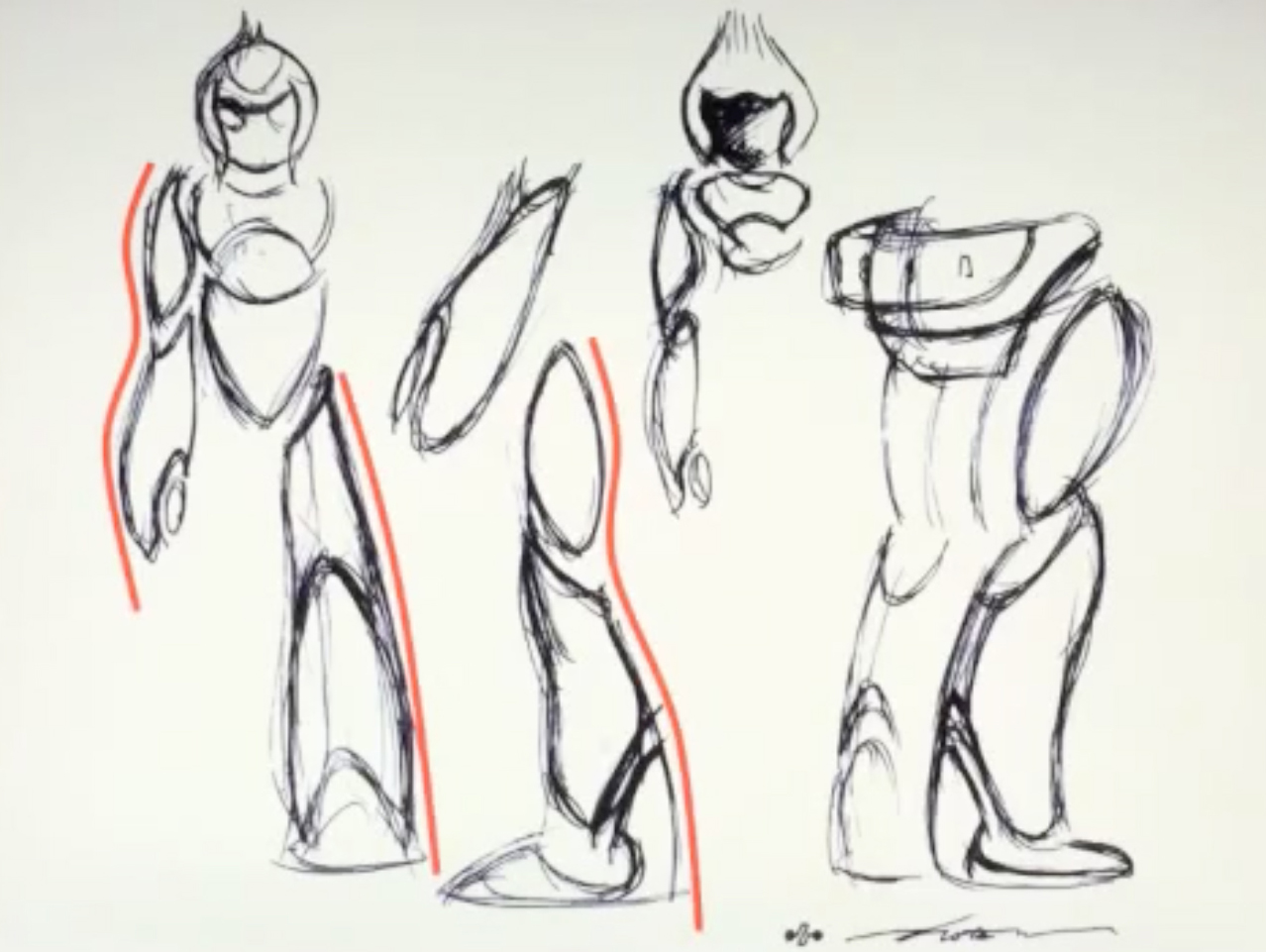 The invention of a new visual language.

The following designs for the prototype of the "e-nuvo HUMANOID" by Snug Design show the evolution of the visual language of the segments of the exoskeleton. The black gaps that divide the blue shields begin to express specific visual information about the direction and orientation of the robot in space. 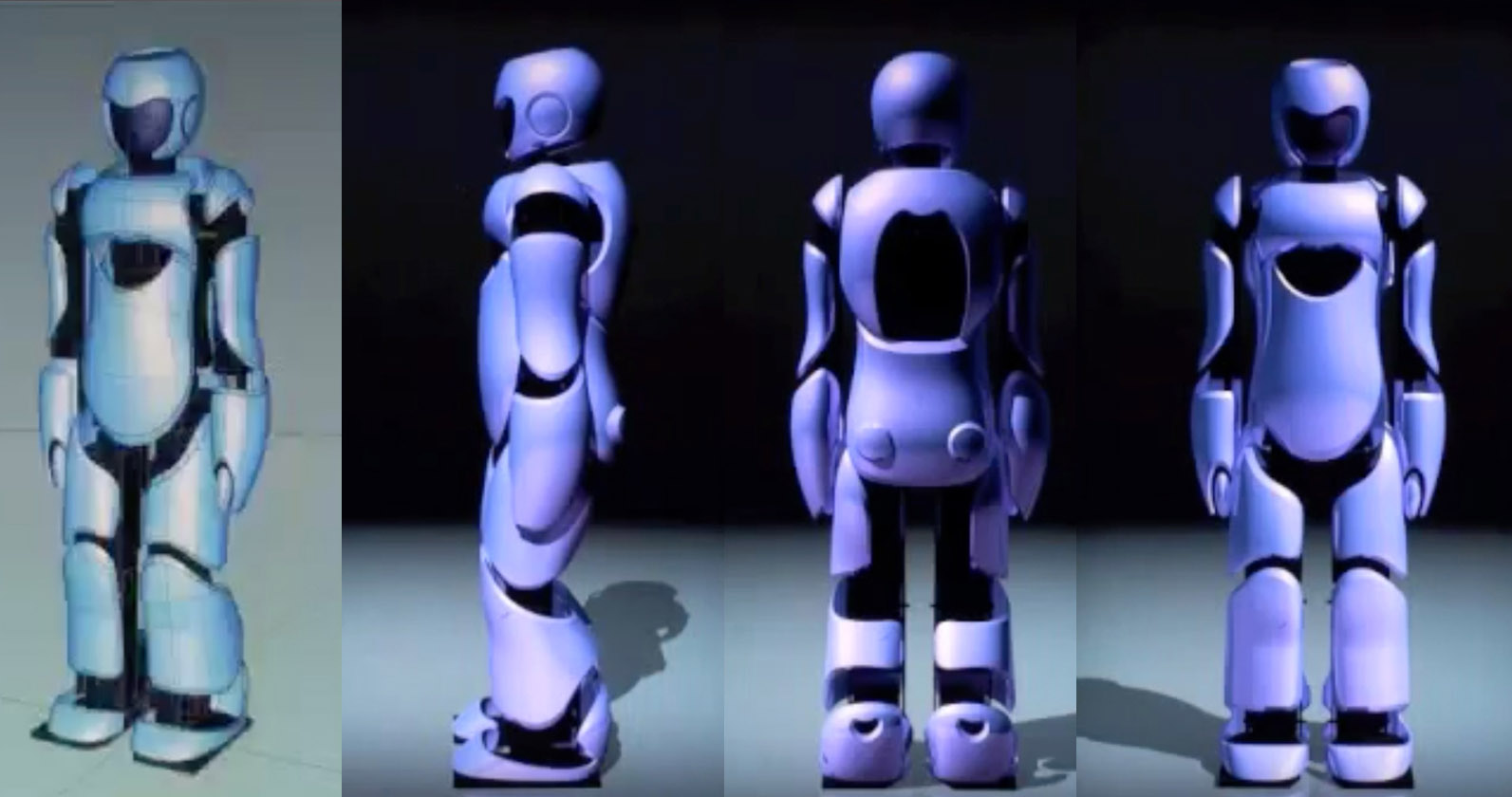